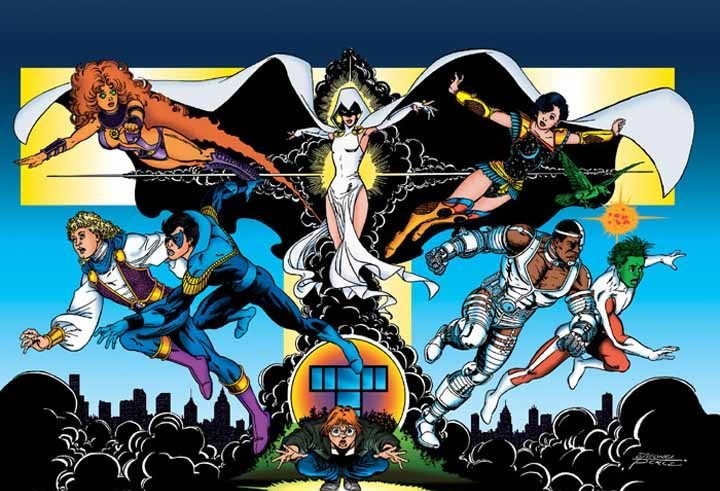 5 Essential Comics is an ongoing series here at Comicsverse where we look at comics characters who’ve taken off in mainstream culture, and recommend the five trade paperbacks or graphic novels we think fans should check out to explore the characters’ comics incarnations. Today we’re looking at the Teen Titans.

On March 29, 2016 Warner Brother animation digitally released (with a Blu Ray/DVD out in April) the latest in their DC Universe Original Animated Films series, JUSTICE LEAGUE VS. TEEN TITANS. The direct-to-DVD feature is the latest in a long string of multimedia productions featuring DC’s teen heroes. The Titans were first seen on the small screen in several segments of Filmation’s 1960’s SUPERMAN/AQUAMAN HOUR OF ADVENTURE series, but didn’t truly break into the mainstream as a unit until the 2003 debut of Cartoon Network’s TEEN TITANS. The series ran for five successful seasons, and was spun off in 2003 as TEEN TITANS GO.

The Titans concept has also been featured, in one form or another, on BATMAN: THE BRAVE AND THE BOLD and YOUNG JUSTICE since then. All this focus has lead to interest in the Titans’ comic adventures. However, unlike other major DC franchises, the Titans have a long and convoluted history that can be hard to navigate for someone unfamiliar with comics. With that in mind, the following chronologically ordered list provides some of the best Titans books for new and old readers alike. 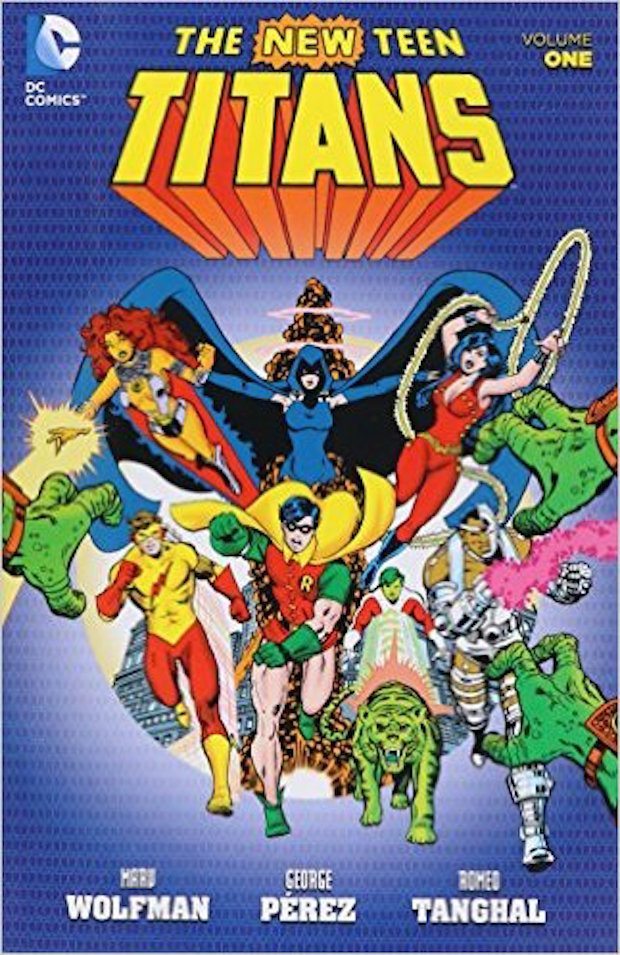 While the original Teen Titans were introduced in the 1960’s and ran sporadically through the 70’s, the franchise didn’t become a cornerstone until writer Marv Wolfman and artist George Perez relaunched the title as THE NEW TEEN TITANS in 1980. The duo shared co-plotting duties and combined previous Titans Robin, Wonder Girl, Kid Flash, and Beast Boy with new characters Cyborg, Starfire, and Raven to create the team’s most iconic lineup, which would later be used in the animated series.

The first six issues revolve around the team’s formation, the debut of Deathstroke The Terminator, the Titans’ first battle with Raven’s demonic father, Trigon, and the confrontation with the Justice League that’s the basis or the animated film. The following two issues revolve around the team’s personal history, with a focus on the new characters. The series was a success out of the gate, quickly becoming DC’s #1 seller and often going head to head with Marvel’s UNCANNY X-MEN for industry supremacy. DC initially released the initial NTT issues as part of their hardcover ARCHIVES series in the late 90’s, and has been releasing them in trade paperback format over the last several years.

READ: Check out our 5 Essential article on Green Arrow! 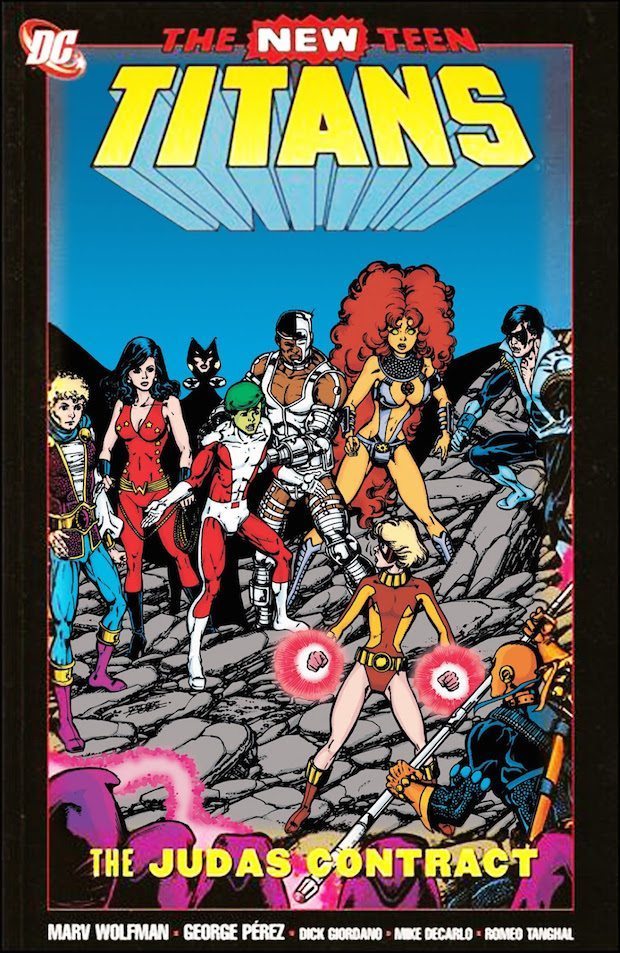 If Titans of the 80’s was DC’s answer to the X-Men, then “The Judas Contract” is their equivalent to the “Dark Phoenix Saga.” The seven-part story, which was the culmination of over a year of stories (which are collected in the TERRA INCOGNITO trade paperback) focuses on the betrayal of the team by Terra, who had secretly been working for Deathstroke since her introduction. The story is incredibly dark for the time, especially in the characterization of Terra herself. It’s also notable for the debut of Dick Grayson’s post-Robin identity, Nightwing, and the introduction of the character Jericho. The saga was collected several times in trade paperback format, however it’s currently out of print. Second-hand versions can be found relatively easily however, and the story is collected within the larger hardcover omnibus of Wolfman/Perez’s work. 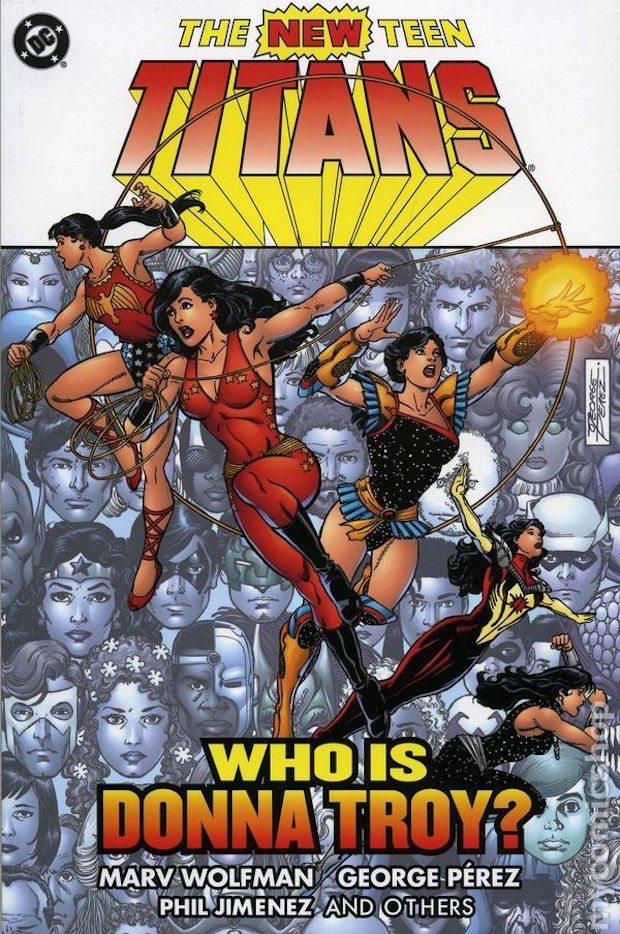 The final collection from the classic Wolfman/Perez era on our list, this  paperback focuses on the history and origins of its titular heroine, Donna Troy AKA Wonder Girl. The trade begins with two of the best single issues in the whole of Titans history; NTT #38 which is a noir detective tale that finally reveals Donna’s Pre-Crisis origin story, and NTT #50 which details her wedding to Terry Long. WHO IS DONNA TROY? then moves on to the second incarnation of THE NEW TEEN TITANS series, and a 6-issue story arc from Wolfman and a returning Perez (who had left several years earlier) detailing Donna’s revised Post-Crisis origin story. The trade then jumps ahead to 2003, with a Phil Jimenez-penned tale that explores Donna Troy’s funeral after her recent death. The stories were collected in 2005 to hype her then-upcoming return from death, and has been consistently available since. 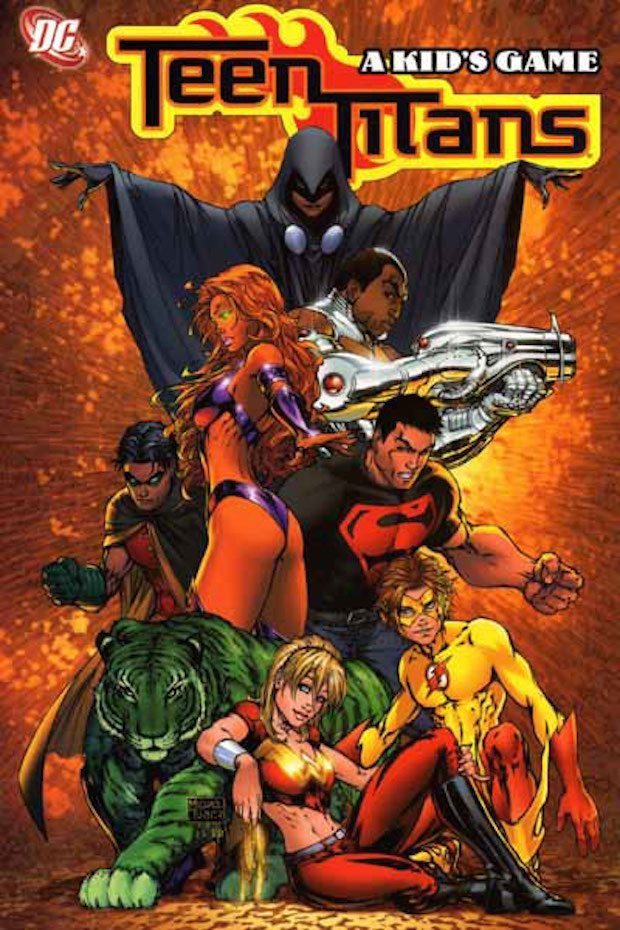 After Marv Wolfman finally let the Titans in 1996, the series went through several moderately successful incarnations. However, it was not until 2003 (not coincidently the same year that the Cartoon Network series debuted) that DC elevated the property to the upper echelon of their universe by putting then-budding superstar writer Geoff Johns on the relaunched TEEN TITANS title. Johns established a similar team dynamic to the Wolfman/Perez years, teaming Titans veterans Starfire, Beast Boy, Cyborg, and, eventually, Raven with the modern incarnations of Robin, Wonder Girl, Kid Flash, and Superboy.

The story begins with the team’s formation after the dissolution of Young Justice in the “Graduation Day” crossover, and covers their eventful first weekend as a team. Johns’ run went on for nearly 50 well regarded issues, all of which have been collected in one oversized hardcover. A KIDS GAME also remains in print as a standalone paperback. 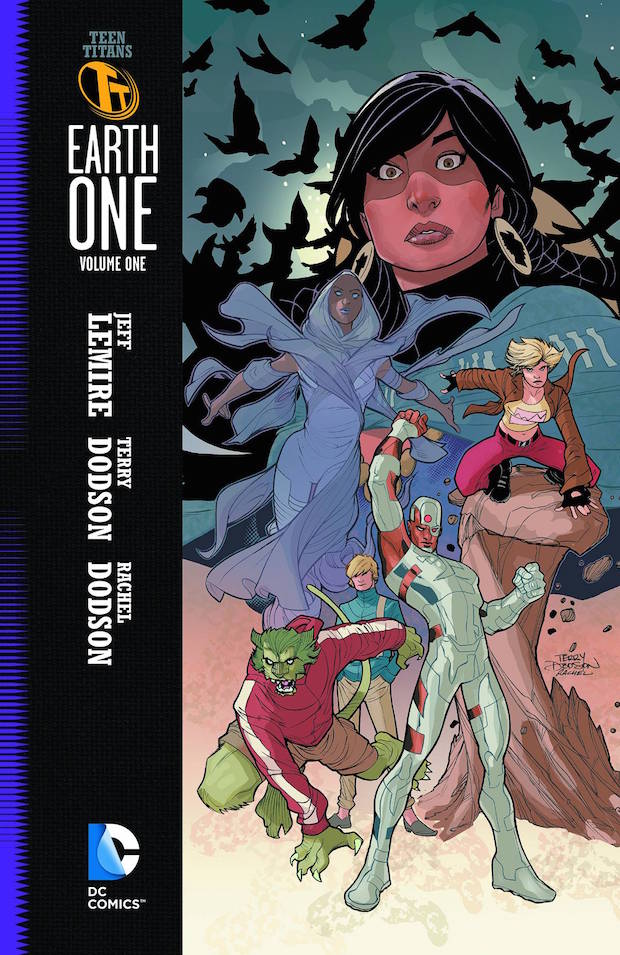 The post-Geoff Johns period has been hit or miss for the Titans franchise, with the New 52 incarnation of the series especially facing critical derision. Given that, it’s perhaps unsurprising that the best Titans material released during this period has been out of normal continuity. The 2014 standalone graphic novel TEEN TITANS EARTH ONE follows the lead of others in DC’s Earth One series, debuting new versions of the characters on Earths where there are no other superheroes. Lemire’s Titans lineup includes versions of Cyborg, Beast Boy, Terra, Jericho, and Raven as they explore their powers and the mysterious connection between them, Cyborg’s mother, and Deathstroke. The story, immensely aided by the beautiful art of Terry and Rachel Dodson, takes an interesting and modern look at the Titans mythos. It’s definitely something I’d recommend to super-fans and newcomers alike, and is readily available.

Of course this list is solely objective, readers, and there are plenty of other Titans-related releases in the DC Comics library. My personal recommendation would be to read these, and then explore all material from the respective run of the title you enjoyed most.

Do you have any other suggestions for Titans material? Feel free to let us know in the Comicsverse forums!