With SPIDER-MAN: INTO THE SPIDER-VERSE in theatres and making us fall in love, the time certainly is now to contemplate a Spider-Verse sequel. Sony Pictures certainly is, what with the announcement of a Gwen Stacy led Spider-Women only spinoff.

If there is to be a sequel, however, not just a spinoff, what other dimensional Spider-folk should be tapped? I humbly offer these five choices for consideration. 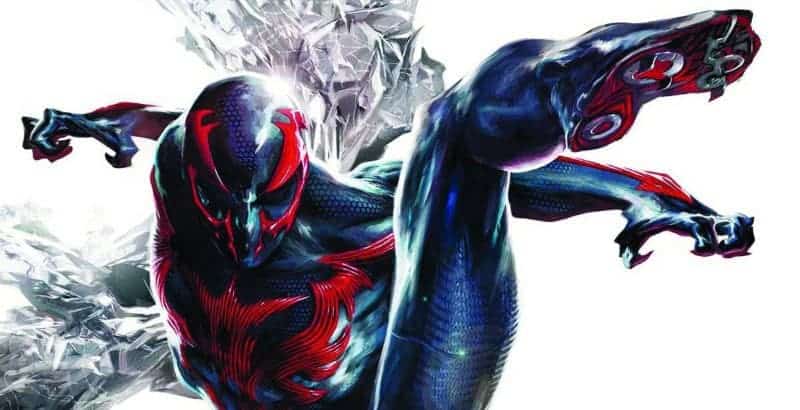 Imagine the kind of leg lifts Spider-Man 2099 could do in a Spider-Verse sequel with its distinctive animation style. (Courtesy of Marvel Entertainment)

The post-credits sequence more or less served this one up to us a silver platter. It would be a shame not to take it, no?

Miguel O’Hara offers a lot. First, he’s from the future so seeing him interact with his past, our present, has plenty of dramatic potential. Second, he is someone who takes on the mantel, inspired by the Spider-Man of lore. He and Miles share an inspiration, albeit separated by many years and coming from different planes of existence. Last, but not certainly not least, his design is excellent. Seeing that Day of the Dead-inspired blue and red spider/skull costume realized, in motion, by SPIDERVERSE’s unique animation style would be just incredible. I’m sure of it. 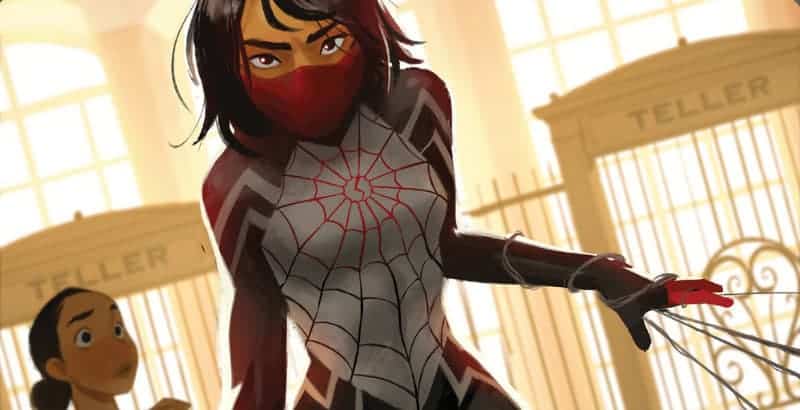 There’s no need to take out money to bribe us with Silk. We already think you should be in the Spider-Verse sequel. (Courtesy of Marvel Entertainment)

This one should be a no-brainer. Silk is smart and competent. Cindy Moon is such a good choice, she is already in consideration for the aforementioned spinoff. I almost don’t have to argue for her. Nonetheless, I will.

First, Silk offers a unique version of the central Spidey grief. As made explicit in INTO THE SPIDER-VERSE, one of the things all Spider-folk have in common is a tragic loss. For Noir, that’s Uncle Benjamin, for Gwen, an alternate universe Parker, and so on. In the case of Moon, she lost her parents to disappearance, but perhaps not death. As a result, hers is a still active wound, one that cannot even begin to heal.

Silk also boasts a slightly unusual means of web-slinging — she has organic webs she sprays from each of her fingertips. With so many characters utilizing similar power-sets, small differences — particularly visual ones — can be a great way to draw attention to a character.

Lastly, Moon and Parker have a sort of magnetic chemistry. Simply put, the more they are in close proximity to each other, the more their hormones go into overtime. To be blunter, they get thirsty for each other. I am not recommending a “break up a coupled Parker” scenario here, to be clear. But somewhere out in the Multiverse there has to be a single Parker who is not that way via tragic means. To see Silk and him wrestle a bit with irrational base attraction would definitely be some comedic relief. 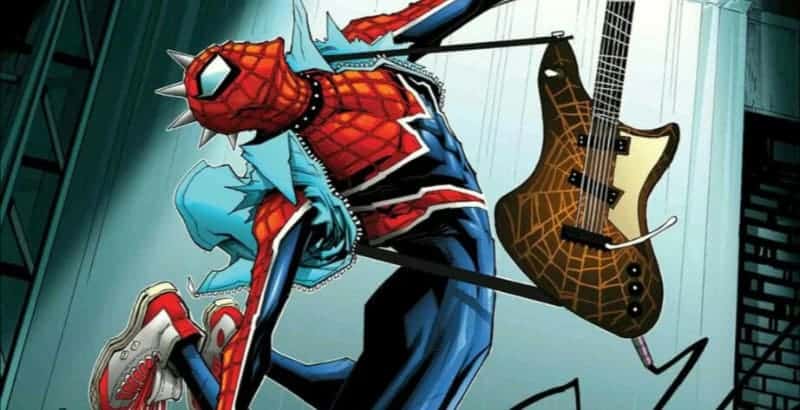 The Anarchic Spider-Man shreds a solo before leaping into the Spider-Verse sequel fray. (Courtesy of Marvel Entertainment)

You may know him best as Spider-Punk, but I assure you Hobart Brown prefers the Anarchic Spider-Man.

His reasons for inclusion include what a different Spider-Man he is. While most Spider-folk are dedicated to upholding the law, he comes from a world where a true hero has no choice but to constantly oppose and attempt to overthrow the system. Imagine the clashes with, say, Miles, whose dad is a police officer and, moreover, someone Miles respects and tries to collaborate with.

Like Miles, Brown is also a man of color under the mask. SPIDER-VERSE did such a strong job of highlighting and interrogating ideas of diversity into the film, Anarchic’s inclusion would give it further chances to explore such dynamics.

Finally, Hobart Brown in the main Marvel U is Hobie Brown, better known as The Prowler. What if a sequel brought in the Hobie Brown Prowler as well? Then, you would have the dynamic of Miles seeing an alternate universe incarnation of the identity his uncle used to commit crimes and Brown coming face to face with a very different version of himself. 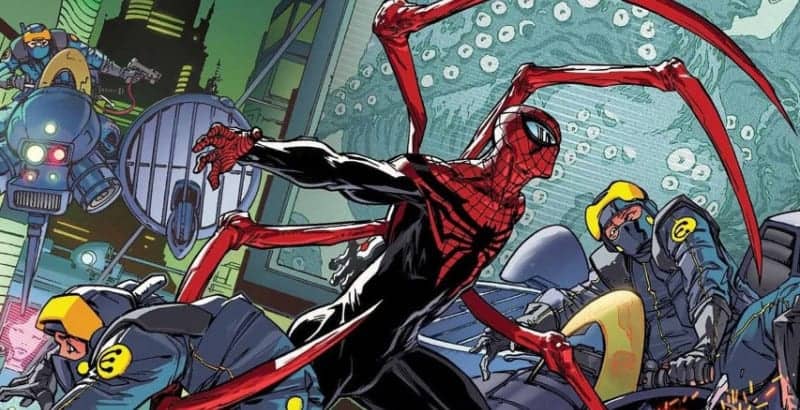 While all the Spider-folk of the first film had different backgrounds and perspectives, they came largely from the same good-hearted place. What if you introduced an arrogant, self-involved villain who may be slowly becoming a hero or perhaps not into the mix?

That is the kind of upheaval the Superior Spider-Man would offer.

I don’t wish to make a Spider-Verse sequel an unpleasant experience by any means, but to have a bad team player who is also secretly Doctor Octopus in brain while still Peter Parker in body could be great fun. His attempts to play along and fit the Spider-Man mold were entertaining when he was the only Spider-Man around. How would he manage when he is actively interacting with other versions of Parker? The dramatic potential is delicious.

Spiderling ditches school in the hopes of getting into the Spider-Verse sequel. (Courtesy of Marvel Entertainment)

Considering how much of the 40-something Peter Parker’s journey in INTO THE SPIDER-VERSE was towards accepting himself as a man who could be a father, the inclusion of Spiderling, the daughter of another alternate dimension Parker seems like an easy choice. Especially if the aforementioned 40-something Parker makes a return in a Spider-Verse sequel.

Besides revisiting and heightening that journey from the first film, Spiderling offers some other interesting avenues. She is young like Miles or Gwen, but she has spent most of her life being trained by an experienced Spider-Man. While Gwen had to learn the ropes on her own and Miles got some brief mentoring from the “visiting” Spider-folk, Anna-May literally grew up in a Spider-Man rich environment.

Also, unlike most Spider-folk, she had two parents who knew her secret identity right away because they were fighting crime right alongside her. She has grown up without needing to hide her identity from the people she most desires the approval of.

Spider-Verse Sequel: Who You Got?

Like these choices? Think they’re garbage? Let us know in the comments below or on Twitter at @ComicsVerse. And, hey, please throw out your suggestions, too. Who knows? You might not only persuade us but maybe a certain film studio that rhymes with “pony.”