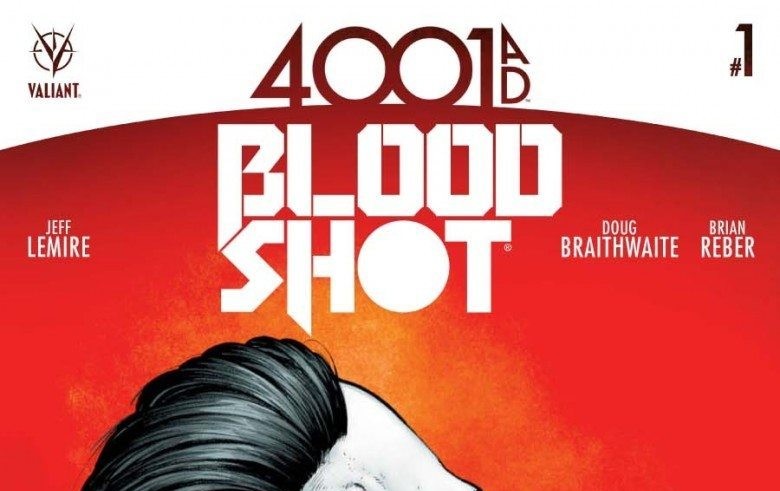 4001 A.D.: BLOODSHOT #1 is a near perfect action comic. The excellence comes from a combination of factors: the writer Jeff Lemire, the artist Doug Braithwaite, and Valiant Entertainment’s extraordinary summer event. This one-shot issue should be read with the four 4001 A.D. related books that were published before it (4001 A.D. #1, 4001 A.D.: X-O MANOWAR #1, RAI #13, and 4001 A.D. #2)’ however, it’s not completely necessary. It would just add more context to the beginning, which is the genesis to Bloodshot being in the year 4001 A.D., and as much as that sounds crucial, it really isn’t in regards to the whole story. I’d even go as far as saying the BLOODSHOT REBORN series, which is also written by Lemire, is more fundamental to grasping the gravity of the issue, particularly the ending.

The issue starts with Bloodshot awakened from chaos. It’s the year 4001 A.D., and Japan has physically left Earth.  The satellite country is called New Japan, and it orbits Earth from space. As the sole superpower, it’s run by an A.I. leader called Father. Father and New Japan have recently been given a virus by Rai and a companion, which was an attempt to end Father’s perceived oppression. Father attempts to quell the infection by releasing “non-essential” sectors of the space country, causing the sectors to disintegrate into the Earth’s atmosphere. Bloodshot happens to be a part of the New Japan Museum sector as an exhibit, and the resulting carnage has jumpstarted his consciousness. As he questions who and what he is, he devises a plan to create a solid body (he’s currently made up of millions of nanites) and complete a proclaimed “final” mission.

My immediate reaction to Bloodshot as a character was a blend of Wolverine’s immortality and memory loss, with the Punisher’s lethalness and determination to complete a mission. Jeff Lemire writes this issue with such fluidity in balancing action and the introspection of Bloodshot. The dialogue was also incredibly intricate and smart, which in turn played into his psyche and goal. You got the feeling of a human trapped in tons of tiny machines, not just a mind-controlled murder-puppet. His final mission holds a lot of emotional weight and adds a lot of depth to the character. It’s quite an extraordinary feat because even though Bloodshot’s goal may have been completed and the issue was very satisfying, it makes you want more. He’s an essential character to Valiant and this one-shot begs for him to still be involved in the rest of the 4001 A.D. event.

Doug Braithwaite’s art matches Jeff Lemire’s writing word for panel. The layout alone is impressive with fractured distorted viewpoints that contain elaborate sequences of destruction. Bloodshot’s design is really cool too. His red mesh/nanite body with a rising-sun hole in his chest is quite unique. Every character, especially their face, seems painstakingly drawn with minute detail. It’s a wonderful book to look at.

The book doesn’t have many weaknesses. The writing and art come together to create a one-shot almost as pleasing and as tasty as pizza. It’s eye, brain, and heart candy. The only thing I’d advise is to read some BLOODSHOT REBORN, and at least 4001 A.D. #1. They certainly aren’t lacking in quality and will add to your understanding of the book, and thus your liking of it. 4001 A.D.: BLOODSHOT is a great addition to the event. It stands alone, for the most part, while putting Bloodshot in a unique landscape with a unique mission, and a unique body. Not only does the book solidify Bloodshot as a character, but it solidifies Valiant Entertainment and their 4001 A.D. summer event venture!