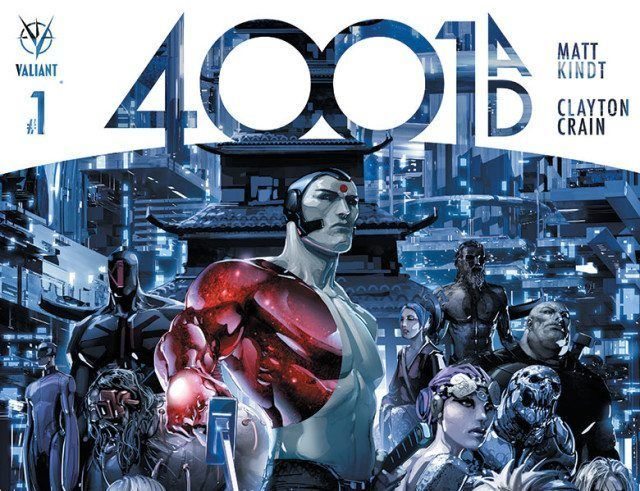 Since the company’s relaunch in 2012, Valiant Entertainment has become a dominant force in the comic book industry with critically-acclaimed titles like BLOODSHOT REBORN, X-O MAN-O-WAR, and ARCHER AND ARMSTRONG. What truly separates Valiant from the rest of the industry is the high-quality level of storytelling they bring to their summer crossovers, and for 2016, the publisher is bringing readers their latest event, 4001 A.D.! With the release of the first issue of this series,  Matt Kindt, Clayton Crain, and David Mack all manage to exceed all expectations for this crossover. 4001 A.D. #1 is the beginning of what looks to be like Valiant’s best book to date and the must-read of the summer.

READ: Want more Valiant? Check out our review of the new audio drama about ARCHER & ARMSTRONG!

After a single issue, 4001 A.D. firmly establishes Valiant’s position as the industry leader in company-wide crossovers. With the RAI creative team of Matt Kindt and Clayton Crain and the addition of the legendary David Mack, readers get a quick introduction to the story of New Japan and RAI thus far before kicking things into high gear. As a reader with minimal experience with the character of Rai but plenty with characters like Eternal Warrior and X-O Man-O-War, I can say that this event has me hooked and you will be too. 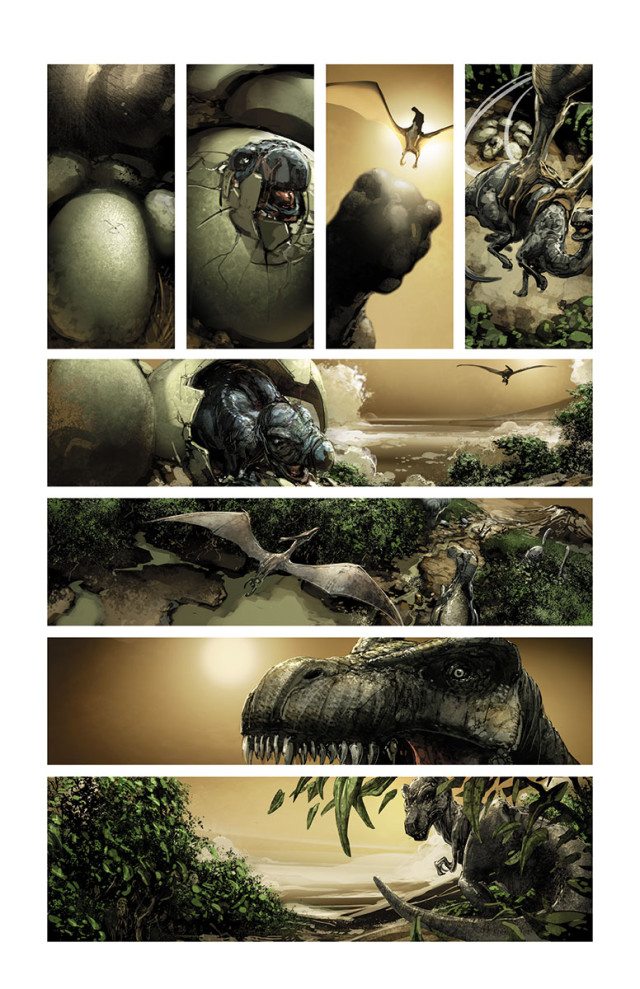 As stated prior, the character and story of RAI is the Valiant title I’m least familiar with. While a huge fan of Kindt and Crain’s previous works, I found the difference in time periods between the ongoing RAI series and the publisher’s other titles to be confusing. When Valiant announced that 4001 A.D. would not only be the title of the next big event but the time period it was set in as well, my interest peaked. How would Valiant tie books together that were separated by thousands of years?  My confusion was replaced by fascination. I needed to find out more about 4001 A.D., New Japan, and RAI. Unlike Marvel and DC, Valiant takes risks in their crossovers that have effects throughout every published title. And like THE VALIANT and BOOK OF DEATH, 4001 A.D. is a well-calculated risk, artistically and story-wise that pays off.

The story of 4001 A.D. kicks off right where the last arc of RAI ended. Father, all-knowing and all-powerful AI, banishes RAI to Earth after he becomes disillusioned with the way New Japan is run. Lulu, a young female friend of Rai, then inflicts a virus on Father that causes him to destroy sections of New Japan in an attempt to rid the virus. This leads to some gorgeous and depressing visuals of what looks to be a sector made completely of dinosaurs being sent crashing to earth and every biological being eroding around as it does. Gorgeous yet depressing visuals like these are frequent in this issue. Lulu confronts her parents who immediately want to give her up to Father, who has labeled her as a most-wanted terrorist. And that’s just what’s going on in New Japan. Earth is a whole different story. RAI has teamed up with Gilad, the Eternal Warrior, to stop Father once and for all in a giant, X-O Man-O-War mecha suit. Yes, readers, this issue has dinosaurs and giant robot, space battles. What more could you want? It is a quick read, storywise, but it firmly establishes the world of New Japan and the timeline before transitioning into some of the coolest action scenes I’ve read from Valiant. And have I mentioned how gorgeous the art is? 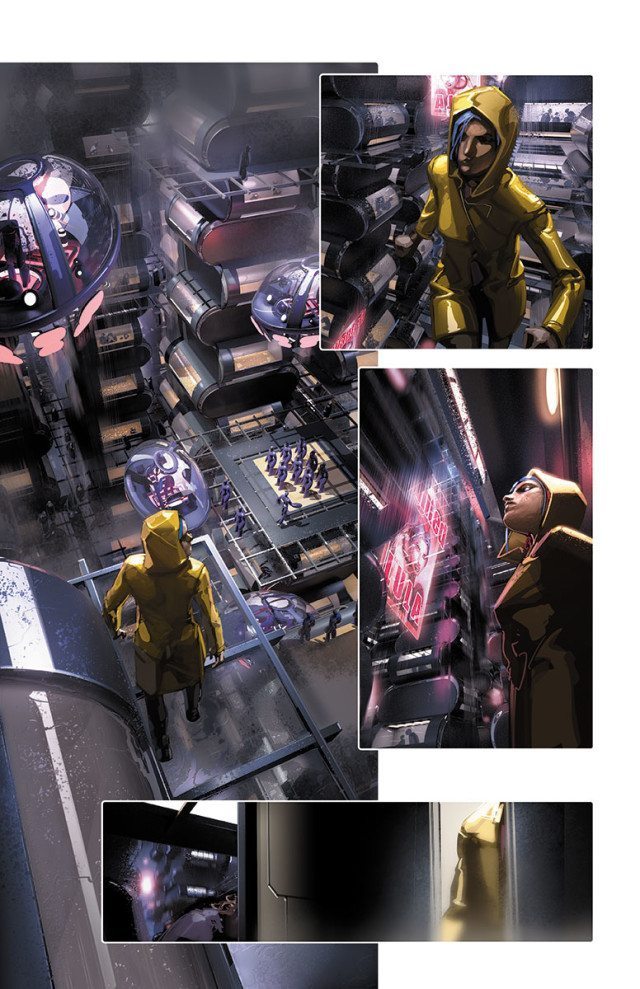 I’ve always found the artwork of David Mack to be fascinating; his style challenges the medium in ways I’ve never seen before, and it continues to do that in 4001 A.D. The paintings serve as an introduction to readers who are not caught up with the story of RAI in what might be the prettiest, informative take on the “story so far” in comics. Going hand in hand with Mack’s paintings is Dave Lanphear’s lettering, it makes the whole thing just pop. Lanphear is a master of the craft, and what he brings to this comic needs to be praised. The biggest player, regarding art, is RAI’s series regular artist, Clayton Crain. Hot off his Image Comics collaboration, SAVIOR, with Todd McFarlane, Crain and his style of digital painting are cinematic in some scenes and emotionally personal in others. From giant robots to creepy AI and even dinosaurs, Crain’s artwork makes this issue visually jaw-dropping and worth every penny.

Outside of this issue’s groundbreaking visuals, Kindt crafts a tightly knit story that’s welcoming to fans of RAI old and new. One of Valiant’s most prolific talents, Kindt is a talented writer whose work I have been a huge fan of for a while now. With the introduction of a long lost X-O suit and the presence of the Eternal Warrior, ties are made to the current Valiant timeline that have me questioning what’s to come. Will this be a time-travelling event? I honestly couldn’t tell you, but this first issue leaves you less confused about the future plot and wanting more of the action. That is the level of storytelling Kindt brings to each and every one of his titles, and whatever direction he brings this story towards, he always has my utmost trust in his ability to deliver the best book possible. 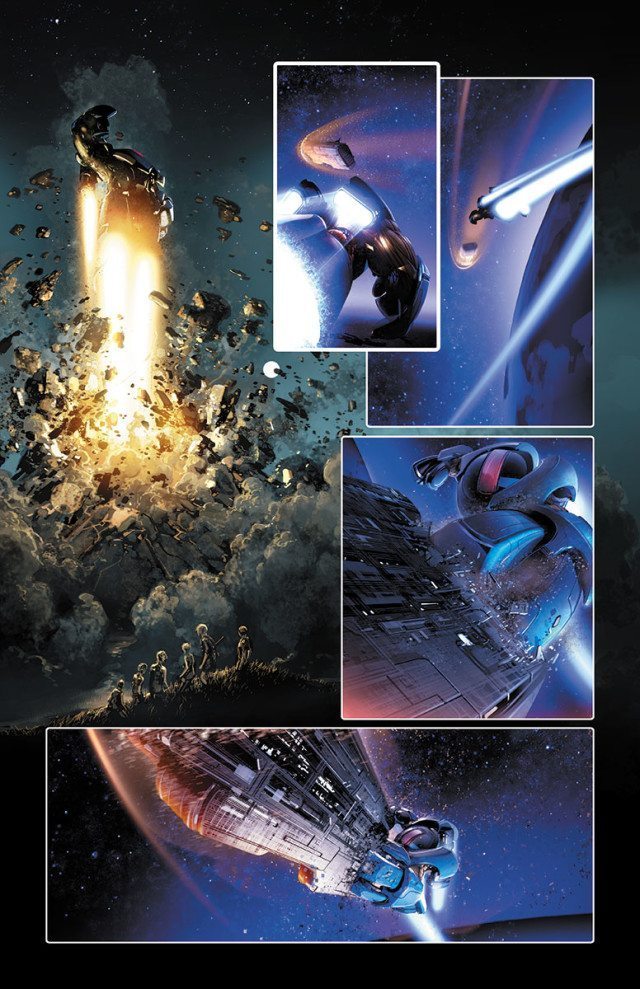 For those of you wanting to catch up on RAI before reading this title, note that Valiant has recently released a deluxe edition hardcover of the first three arcs. I haven’t read it, though I’m planning to, and I feel like David Mack’s introduction to RAI, and New Japan is all you need to get into this crossover. In a summer that is looking to be bogged down by superheroes at war and relaunches, the first issue of 4001 A.D. truly stands out as the beginning of what looks to be another Valiant storytelling masterpiece.

READ: Are you Team Cap or Team Iron Man? Find out what team we’re on in our review of CIVIL WAR!