If you don’t already know, the Green Lanterns are a pretty big deal. They are an intergalactic police force that has awesome rings that are equal parts powerful and fashionable. Not everyone gets the honor of being part of the Green Lantern Corps, of course. The rings choose the right people for the job, and they only choose people they deem worthy.

One of the hallmarks of being a Green Lantern is the ability to overcome great fear. Throughout comics history, we’ve seen very strong characters inherit these rings on that very principle. The concept of having to overcome fear to become a superhero is something that makes the Green Lanterns unique and relatable. Hal Jordan conquering his fear of flying after his father dies in a tragic plane crash is a wonderful story of triumph and makes his character so popular.

READ: Want to know where Hal’s been? Check out our review for HAL JORDAN AND THE GREEN LANTERN CORPS #13!

Unfortunately for some of us, our greatest fears are not as tangible or readily accepted as Hal Jordan’s fear of flying. Our fears can be as simple as getting out of bed in the morning, talking over the phone or entering crowded places. That’s where superheroes and the comics industry usually fail people who suffer from anxiety. The courage of our most beloved superheroes is often so superhuman that it’s hard to relate to. Their feats are odds-defying and spectacular. Most deal with fear on some level, but there are precious few heroes that experience the chronic, confusing and debilitating fear that is an anxiety disorder.

That is where Jessica Cruz comes in.

Jessica is Earth’s first female Green Lantern, which is a pretty big deal. The road to becoming it was not an easy one. Not much is known about Jessica’s early life besides a traumatic incident that resulted in her developing crippling anxiety. She did not leave her apartment for four years after this incident. She might have stayed there forever had a controversial power ring, the Ring of Volthoom, not found her and taken over her body. Under the influence of the Ring of Volthoom, Jessica left her apartment and attacked her hometown.

READ: Need to catch up on JUSTICE LEAGUE: THE DARKSEID WAR? See what Jess was up to here!

Eventually, she was confronted by the Justice League, and it took a pep talk from Batman for her to wrestle back control of her body from the ring.

It wasn’t a permanent solution, of course, and during the Darkseid War in JUSTICE LEAGUE #50, her body was overwhelmed again by the power of the ring. Though she was being controlled, she managed to break free of the trance long enough to save the Flash’s life. In the process, it looked like she sacrificed her own. Jess survived, and her act of bravery and selflessness earned her a Green Lantern ring.

Wrong. Jessica is thrust into a role and world that challenges her anxiety every moment of every day. Her life before becoming a Green Lantern was already a battle. Once she becomes a superhero, she’s fighting a war on two fronts.

READ: Want more comics that tackle mental health? Take a look at our review of THE ELECTRIC SUBLIME #1!

Her new career as Green Lantern isn’t glamorous. It’s terrifying, harrowing and messy. Fighting aliens is a thousand times harder when you’re simultaneously trying to stave off a panic attack. Even something as simple as getting up to face the day can be overwhelming, and that’s something Jessica Cruz’s story doesn’t sugar coat.

Here are the 10 reasons why Jessica’s anxiety is such a touching read.

Jessica’s anxiety is very real. It’s not sugar coated or dramatized. Those of us that suffer from anxiety can tell you that probably the number one certainty from anxiety is that it is never convenient. It can sprout up at the worst of times. For Jess, an anxiety attack can happen right in the middle of a battle.

Her anxiety is not rational. A large task may be overcome with ease one minute, and then a small task might completely overwhelm her later. That’s a common theme of anxiety disorders and one that isn’t discussed enough. Anxiety also doesn’t just go away like some people seem to think. Jess isn’t afraid to remind those closest to her of this.

READ: Can’t get enough Jess? Check out our review of GREEN LANTERNS #6!

Her struggle with her mental illness is so relatable because we get to see her battle it in impossible situations as well as in normal, everyday situations.  Regardless of where it strikes, her anxiety can render her completely immobile. Anxiety is commonly thought to be something akin to shyness or nervousness. Instead, it can be a debilitating disease that confines people to places they deem safe. Even though Jess is a superhero, her anxiety makes it hard for her to get out of bed some days.

Sometimes, she breaks down. While we never want to see our favorite characters hurt, it’s refreshing to see instances of Jess lose the battle against her anxiety. It is a reminder for everyone who deals with this day in and day out. Sometimes, you just need to break down. Sometimes you aren’t going to be able to get out of bed. That’s okay.

Despite her struggles, Jess is not a tragic character. Her story is full of hope for people who suffer from anxiety. Small lessons on coping weave throughout her story. The first is the importance and emphasis on support systems. Jessica’s partner Simon Baz and her sister Sara are both very important figures in her life that love her unconditionally. They may not always understand her anxiety, but they are there for her when it counts. Their support helps her fight her battles.

READ: Who is that handsome man with the pancakes? Get introduced to Simon Baz!

Jessica’s fear doesn’t stop her from inspiring others. Anxiety has a funny way of making us withdraw from the world around us. Sometimes it feels safer to cut ourselves off from others and become isolated. Jess is a great example of how being honest about your fear can help combat that. Her openness makes people feel brave and inspiring them gives her strength. She understands that anxiety isn’t anything to be ashamed of, it is a tool that can start conversations about courage.

Her coping mechanisms actually translate to the real world. Jess regularly tries to challenge her unhelpful anxiety-induced thoughts. This happens to be a common therapy technique when dealing with anxiety. As soon as a scary thought arises, Jess attempts to dispute it with the rational part of her brain. While it may not always work, it’s a very good habit to get into. Over time, the voice that challenges gets stronger than the voice of fear.

And her coping mechanisms don’t stop there. Jess has a wide variety of tools at her disposal that she knows works for her. Of course, not everyone’s tools are the same. But showing this important part of coping with anxiety as part of a superhero’s daily routine is beautifully nuanced. Her tools can serve as inspiration as well as a starting point for you to find your own tools that work for you.

9) Braver Than the Rest

While she may not always have the superhero thing down, Jess is undoubtedly one of the strongest characters in comics history. She deals with fear most of her superhero colleagues have never even considered. Jessica was a survivor long before she became a Green Lantern. She is on an entirely different level than most heroes. 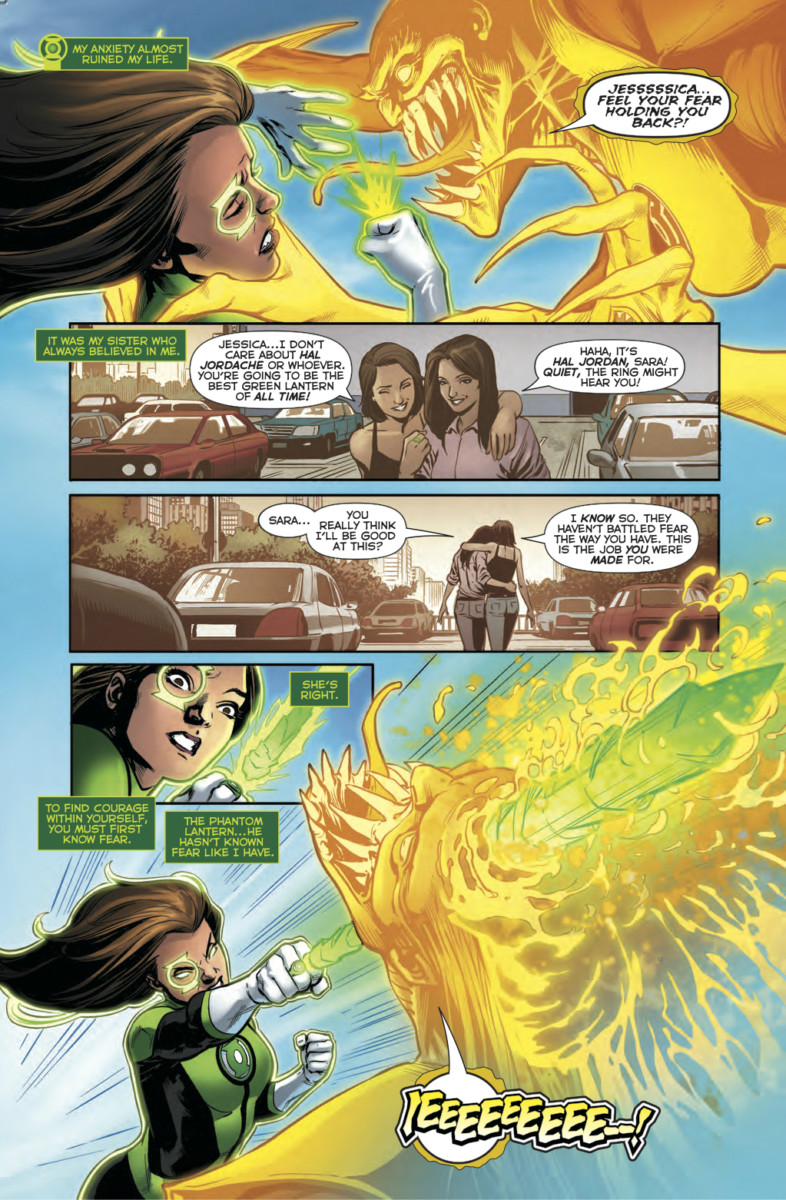 READ: Want to see the whole fight?  Jess kicks some serious butt in our review of GREEN LANTERNS #13!

10) More Than Her Anxiety

Most of all, Jess shows us that we do not have to be ruled by our anxiety. We are made up of a hundred different things, a thousand different strengths, and those are the things that define us. In GREEN LANTERNS #14, Jess fears that once she puts on an ancient power ring that responds to the wearer’s most intense emotions, she will turn into a Yellow Lantern who gleans power from fear. Instead, she turns into her truth: a Green Lantern. Her will is stronger than her fear.

Anxiety tricks us into believing that our fear is the biggest, loudest part about us. It can pop up at the worst of times; it can confine us to our beds, and at times it can dominate our will. Jessica Cruz suffers from these same pitfalls. Her status as a superhero does not protect her from them. In fact, it makes it harder. In that way, she is an inspiration to us all.

For me, reading her story has been a great source of strength. I find myself repeating her words: I am not my fear, I overcome fear. I know that if Jess can battle her anxiety every day and fight giant space monsters, then I can definitely get out of bed. Even on my worst days.