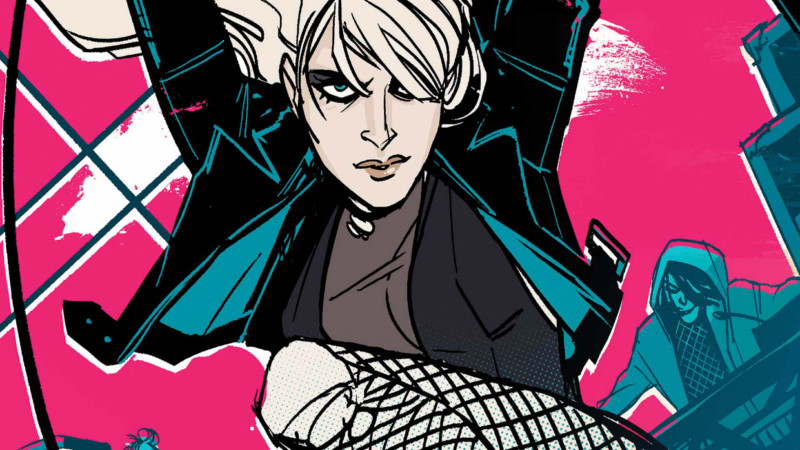 It’s no secret that comics haven’t been very inclusive in the past. Even today, after the industry has made leaps and bounds to embrace more diverse characters, there’s still a ton of room for improvement. In line with the advancements DC has made in confirming bisexual characters, such as Wonder Woman and Catwoman, we at ComicsVerse want to carry on the momentum. Of course, there’s a broad spectrum of orientations that we would love to see comics explore, but we’ll be focusing on bisexuality specifically here. Here are the ten DC ladies we think could — and should — totally come out as bisexual.

The Case for Bisexual Ladies

Zatanna is a world-renowned magician and a member of the Justice League. When she’s not on call, she’s usually dealing with some kind of creepy occult disaster on her home turf. Zatanna’s relationships in comics have traditionally been with men, but there’s always room for change. During her time in comics, she has seen more alternate dimensions and supernatural evils than most of her fellow heroes have — put together. It is entirely plausible that her preferences might not be limited to just one gender. Zee has a very open mind and has seen a lot of things others might classify as unbelievable. Someone as worldly and loving as she is could very reasonably be attracted to women as well as men and pursue relationships with each. Besides, who wouldn’t want to date a famous magician? Those fishnets? Sign me up!

Mari McCabe is an amazing woman who got her own spotlight in DC REBIRTH earlier this year. She’s a world traveler, a successful businesswoman, professional model, and superhero. Mari grew up in a small village in Africa where she was witness to horrible events that left her orphaned at a young age. When she moved to America, she made a name for herself as an entrepreneur. When she traveled back to her home as an adult, she reclaimed her family’s stolen Tantu Totem. It imbued her with her abilities and with those abilities, she became Vixen. Writing Mari as bisexual would allow her to really showcase both the reclamation aspect of her story and her strength. Given the fact that she is a public figure in the DC Universe, she could really inspire others around her.

Of course, Mr. Miracle and Big Barda’s marriage is one of the best in comic book history — but being married to a man doesn’t automatically make a woman heterosexual. Barda could totally be bisexual! Born on a war planet called Apokolips ruled by Darkseid, Barda endured a harsh upbringing. Her keeper, Granny Goodness, groomed her to lead someday the team she trained with, the Female Furies. The Furies all grew up in an orphanage together with little to no outside contact. Think of it as a dark, more terrifying version of Themyscira. Similarly, it seems obvious that these women would’ve had relationships with one another. They weren’t waiting around for men, at any rate. Barda should definitely come out as bisexual and stand as a strong example of how being in a heterosexual marriage does not erase one’s orientation.

READ: Barda is a Jack Kirby creation! Want to read more Kirby? Here’s our review of his NEW GODS #1!

Miss Martian is literally from another planet, so it’s a little odd that she would adhere to Earth’s definitions of sexual preference at all. While pop culture inspires and allows M’gann to connect to others, she is first and foremost a lover of people. She has such an open heart and comes from a world where the strict binary of Green & White Martians erupted into a civil war. It would be wonderful to see her embrace Earth’s concept of bisexuality and push the boundaries of what’s expected of a teenage girl in our society. Getting stories of her crushing on both boys and girls would be so cute and a really excellent opportunity for telling stories about growing up.

I’ll be honest: this one is completely selfish. I just always wanted to see Donna and Starfire get together. They have what’s often heralded as one of the strongest friendships in all of comics. One could even go so far as to say they’re gal pals. Just gals being pals.

I mean, come on. Donna’s origins tie her to Wonder Woman and subsequently Themyscira, so the case made for Diana’s bisexuality should be made for Donna as well.

READ: What’s Donna been up to lately? Find out in our review of TITANS ANNUAL #1!

Lady Blackhawk has been pushing boundaries and defying what’s expected of her since 1959. She became the first woman to join the World War II, all-male team of pilots called the Blackhawks. After a time-warp event transported her to the future, she joined up with present-day heroes to continue fighting the good fight. It would be fantastic to see someone from the old world embrace the new one’s push for diversity. Considering she was a champion of women’s rights back in the day already, it would be wonderful to give her the freedom of being openly bisexual in the 21st century, where she might not have been able to do so in her own time period.

Rose Wilson was the resident bad girl in the Teen Titans for a time, but that’s not all there is to her. She is a complex and, at times, deeply troubled character who always marches to the beat of her own drum. Often written as being very comfortable with her sexuality and femininity, she could easily come out as bisexual without anyone batting an eye. Her unapologetic attitude could translate into bisexuality. It would be lovely to see her explore more of herself through the lens of sexuality.

READ: Rose is the daughter of renowned supervillain Deathstroke! Take a look at one of his latest adventures here!

Karen Beecher deserves more than an origins story that ties her to a relationship with a man. She is so much more than just Mal Duncan’s girlfriend, and it’s time for her story to move away from becoming a hero just to make the Titans appreciate her boyfriend. Karen is insanely smart and such an important character in the DC Universe. Her coming out as bisexual could allow her to have her own storylines and paths for exploration. Plus, she is one of the characters in the new TV show DC SUPER HERO GIRLS which is very popular with the younger generation. Her coming out as bisexual would allow her to be a role model on that front as well as all other fronts.

Helena Bertinelli is a badass mafia princess who drives a motorcycle and uses a crossbow. She can’t be straight — she just can’t! All jokes aside, it would be amazing to see Huntress come out as bisexual because of her popularity as well as the religious component to her character. It’s not often we see religious characters, and even less often we see religious characters who also identify as queer. Opening up that part of her story could be very rewarding. Plus, there’s a nod to her and Lady Blackhawk once having a threesome with Hal Jordan. While the initial mention of it is problematic, a talented writer could rework that with ease.

READ: Want more crossbow motorcycle babe content? Read our interview with the writers of BATGIRL AND THE BIRDS OF PREY!

Dinah Lance is a badass in a leather jacket and fishnets who has always been a symbol of female empowerment. Writer Gail Simone actually intended for Dinah to be bisexual. In her words, Dinah reminded her of “a lot of some of the awesome gay women I knew from the Bay Area of California, many of whom rode motorcycles and some of whom could fight and wore leather…” Due to some oversight, the line confirming her bisexuality never made it into the comic. However, the initial intent means there’s hope for the future. Gail planted the seed. All we need now is another awesome writer who will carry out that vision. There’s no question that it would make a great addition to Dinah’s story and character.