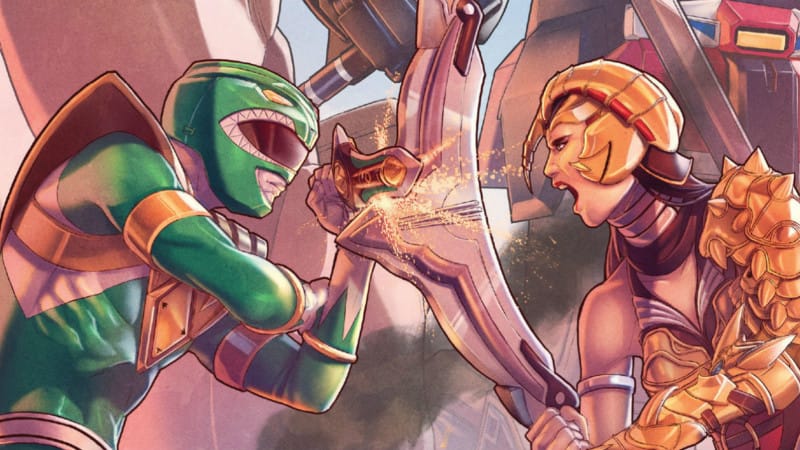 I was born on Christmas of 1990; I was alive for the MIGHTY MORPHIN POWER RANGERS television series. I had to fist fight my two cousins to be the Red Ranger when we played. I lost every time, which was not very Red Ranger-y of me. For a long time, the Power Rangers were more than the color-coded characters painted across my underwear and bed sheets, but kids grow up. I started focusing more on being cool (I was unsuccessful), talking to girls (wildly unsuccessful), and I demanded more from my stories than a “Hee-Yah!” powered kick, cheap visual effects, and expository dialogue. The allure of the Power Rangers was gone and with it went the underoos, bedsheets, toys, and countless VHS tapes — uh, that’s like an old Blu-Ray for you teens. When the POWER RANGERS reboot was announced, I had mixed feelings because it seemed like an obvious cash grab: nostalgia is like oil for movie studios.

I don’t know what made me say yes when my editor asked about covering the Power Rangers comic, but I did. I wasn’t expecting much, but BOOM! Studios blew my boring adult socks off. I couldn’t believe I was sleeping on the best of the Power Rangers franchise. I stayed up all night reading every issue of anything Power Rangers by BOOM! So here I am: 26-years-old and I still want to be the Red Ranger. In fact, I’d like to be any of the Rangers in this incarnation. Every single character is rich and the story arcs are very strong. It was difficult compiling a list, but here go my top ten favorite things about the MIGHTY MORPHIN POWER RANGERS comics. 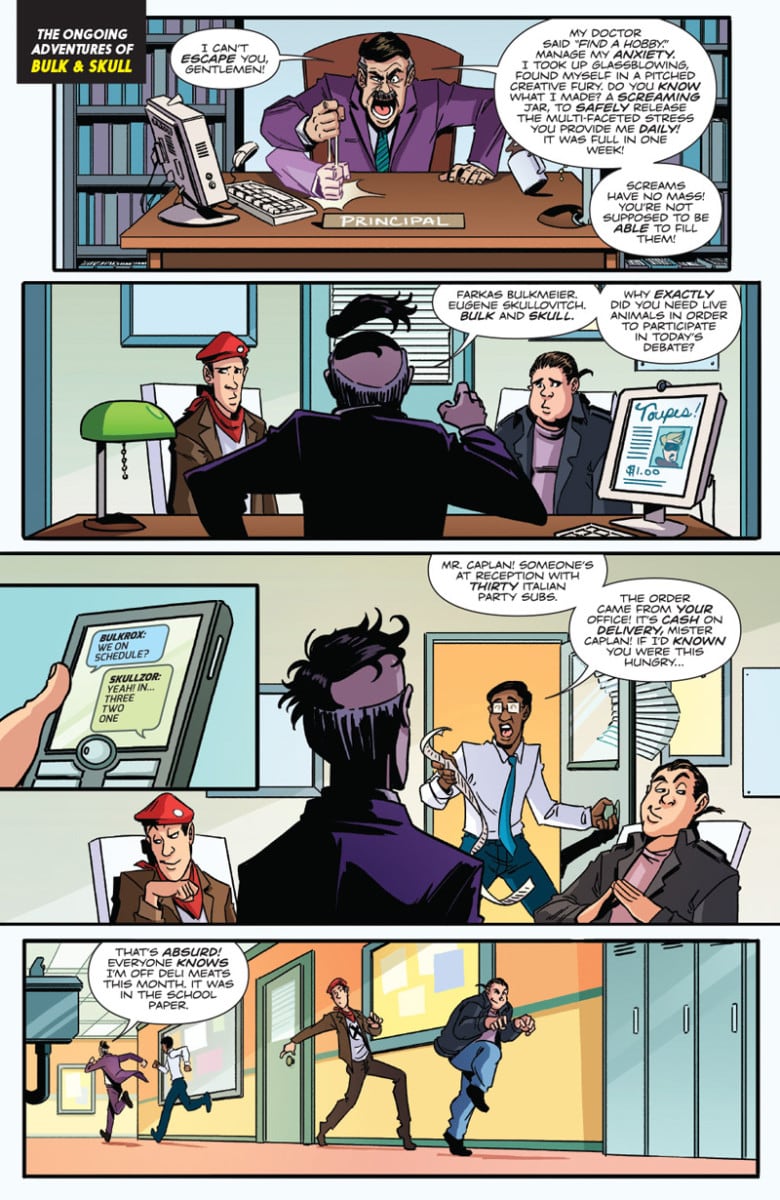 BOOM!’s Power Rangers are a little more serious than what you remember. The stakes are higher because the characters are more developed and the story is written for an older audience. That being said, the silliness of Skull and Bulk is retained in two or three funny-pages style comics at the end of some of the issues. It features Skull and Bulk pulling pranks and struggling with getting people to like them. It adds to the world BOOM! is building, and it’s a nice light dessert to a sometimes heavy entrée. 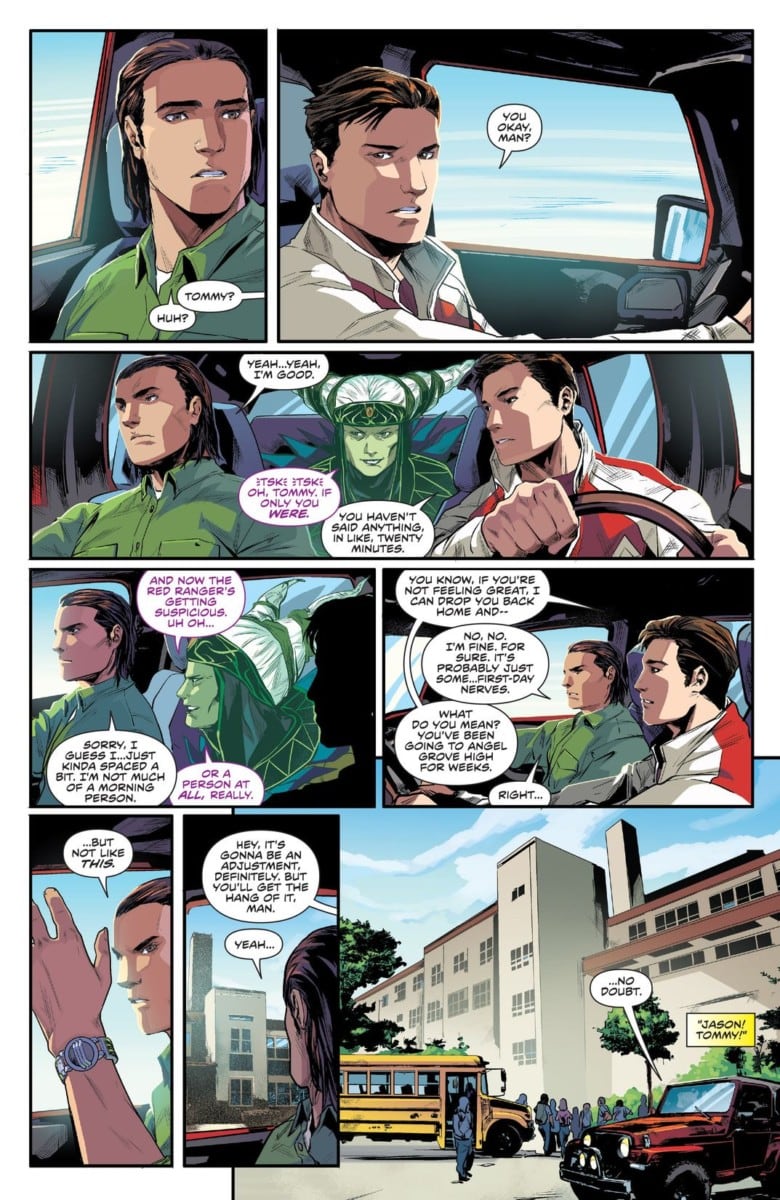 In the Arkham video game series, Batman and Joker become bonded, and at one point, the Joker is in Batman’s mind. Occasionally, Mr. J pops up and screws with Bruce’s sanity. Since Rita Repulsa gave the Green Ranger his powers, she’s similarly bonded to Tommy. From the beginning of the series, she’s whispering all his doubts and insecurities into his ears. Unlike the playful Joker, she’s more direct and vicious. The Green Ranger has always had a weird relationship with the Rangers as a result of his origin, but Kyle Higgins’ writing removes the soap-opera styled tension the television series carried. The resolution isn’t as easy as it is on TV either; it takes longer to build that trust between Tommy and the squad. There are real conversations and concerns among the Rangers, adding a great depth to each of the characters. 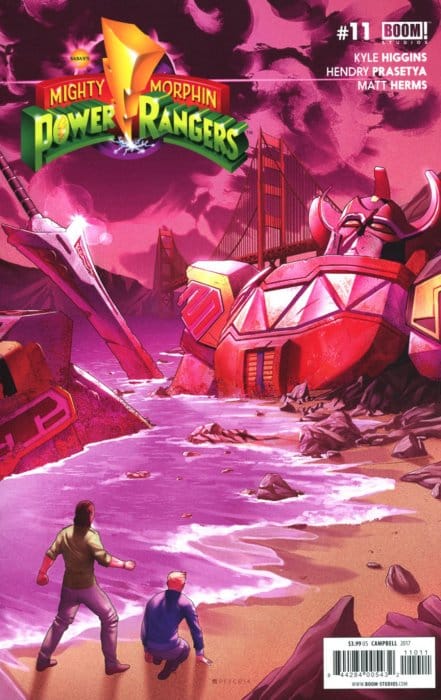 In the latest arc, the Rangers face a villain that appears to be unstoppable. In an effort to destroy the robotic foe, Billy and Tommy jump inside of him to mess with his circuitry. Instantly, the two Rangers are sent to the dimension from which their enemy came, an alternate timeline in the future. In this reality, Tommy never left Rita’s side and they destroyed the Power Rangers together. In issue #11 of the arc, Tommy meets this version of himself, a scar-faced badass named Lord Drakkon who has no reservations about killing young Tommy. The timeline is so dire — and awesome — that the only logical move was to pay homage to PLANET OF THE APES on issue #11’s cover. 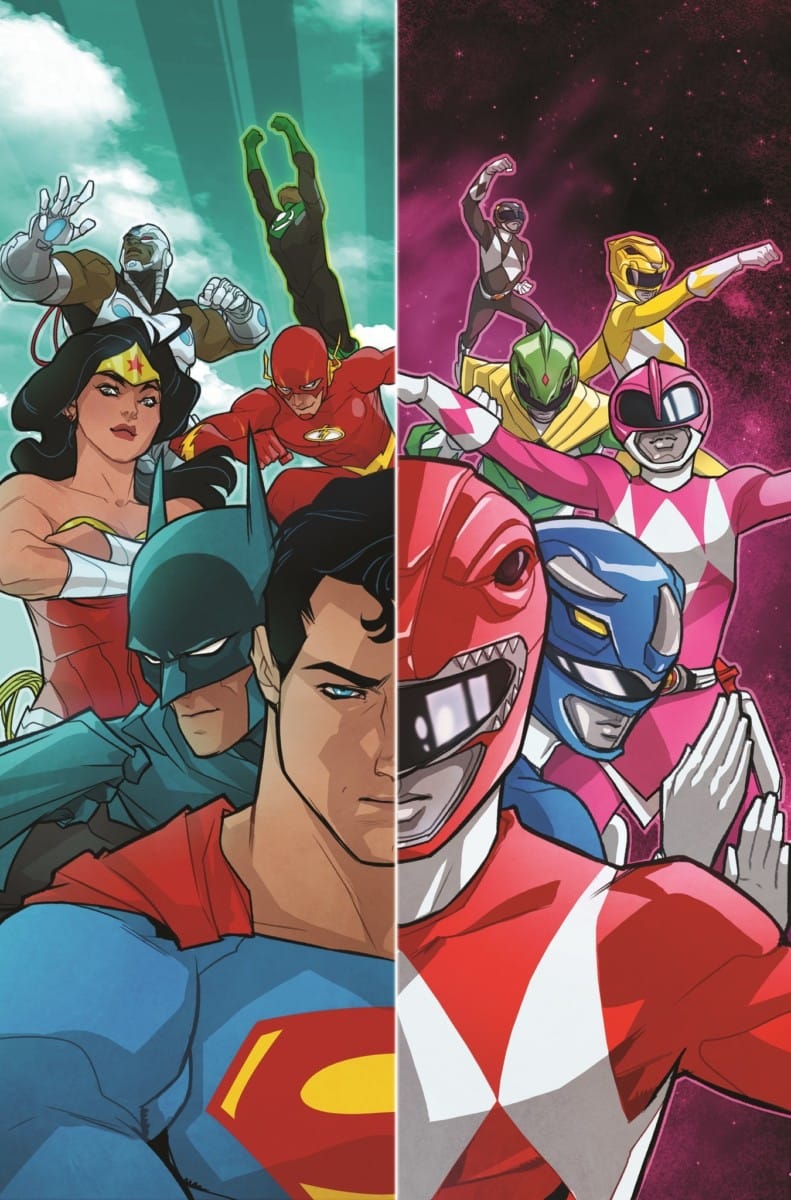 7: The Justice League Team Up

While the JUSTICE LEAGUE X POWER RANGERS crossover is only in its second issue, it’s pretty exciting. Sure, the six-issue run begins with a predictable, “One of our bad guys somehow got to your universe and now we have to fight them together!” inciting incident but the real magic occurs when the two teams meet. No doubt your brain exploded when the Power Rangers met the Ninja Turtles, but this is way better. In BOOM’s universe, the the Power Rangers can actually stand a chance against the Justice League. Additionally, writer Tom Taylor provides excellent banter between the two super teams. One panel features Zack, the Black Ranger, asking Batman why he doesn’t smile.

READ: Want a deeper Analysis of BOOM! Studios’ POWER RANGERS? Find out why you should be reading it!

In the age of all-super-hero-everything, people get tired of the same origin story. We meet person X, person X feels like they should be greater, person X gets bit by a radioactive animal, person X’s uncle dies (AGAIN), person X decides to use powers for good, person X obtains a villain, person X beats the villain, and person X is recognized as a hero. You bored reading that? I was bored writing it. MIGHTY MORPHIN POWER RANGERS doesn’t feature an origin story. We jump right into the action. 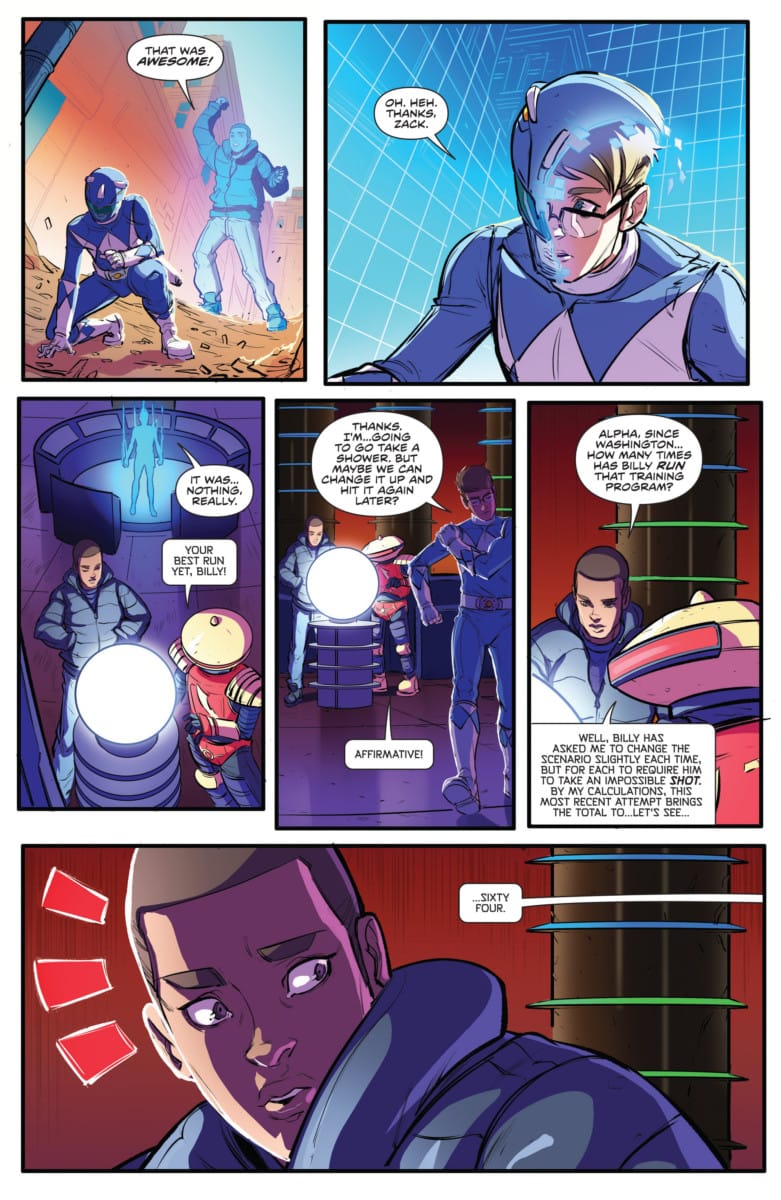 With a team of six, it’s easy for some characters to fall into the background. The Blue Ranger, Billy Cranston, was certainly in danger of this, but BOOM! and Kyle Higgins avoided this in spectacular fashion with issue #10. Jon Lam brings a new art style to the series in an installment that is dedicated to Billy’s struggle with heroics. He doesn’t feel like a hero because the fighting doesn’t come easy to him. With the help of Zack, Billy comes to realize what it means to be a hero and finds his place on a team where everyone brings something to the table. When you’re a kid, it’s easy to pick your favorite Ranger, but when a comic like this one drops, it makes it very difficult to choose. 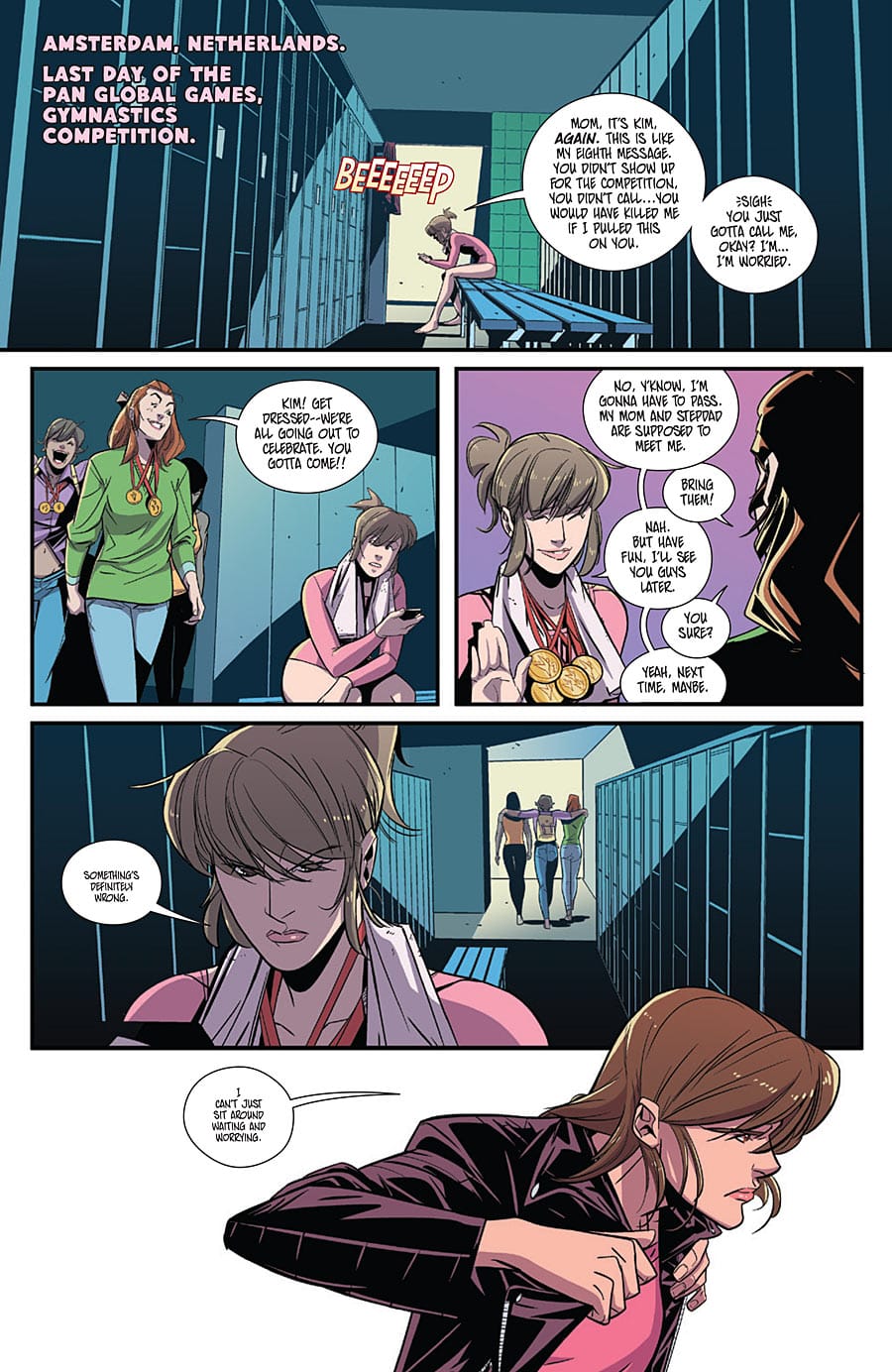 In some ways, the Pink Ranger has a sullied legacy. For the most part, no one talks about her character unless they’re talking about their sexual awakening. I’m sure that Amy Jo Johnson, who played the Pink Ranger on the MIGHTY MORPHIN POWER RANGERS television series, has heard the words, “I had the biggest crush on you when I was a kid,” more times than anyone should hear. All of this is to say: the Pink Ranger deserved better. Maybe that’s why she was given such a rich side series. In this 6-issue spin-off called MIGHTY MORPHIN POWER RANGERS: PINK, Kimberly Hart is a retired Power Ranger focused on her career as a national gymnast until she gets pulled back into action. It’s a wonderful story about what it means to be a hero, stepping out of the spotlight, and living with your decisions. 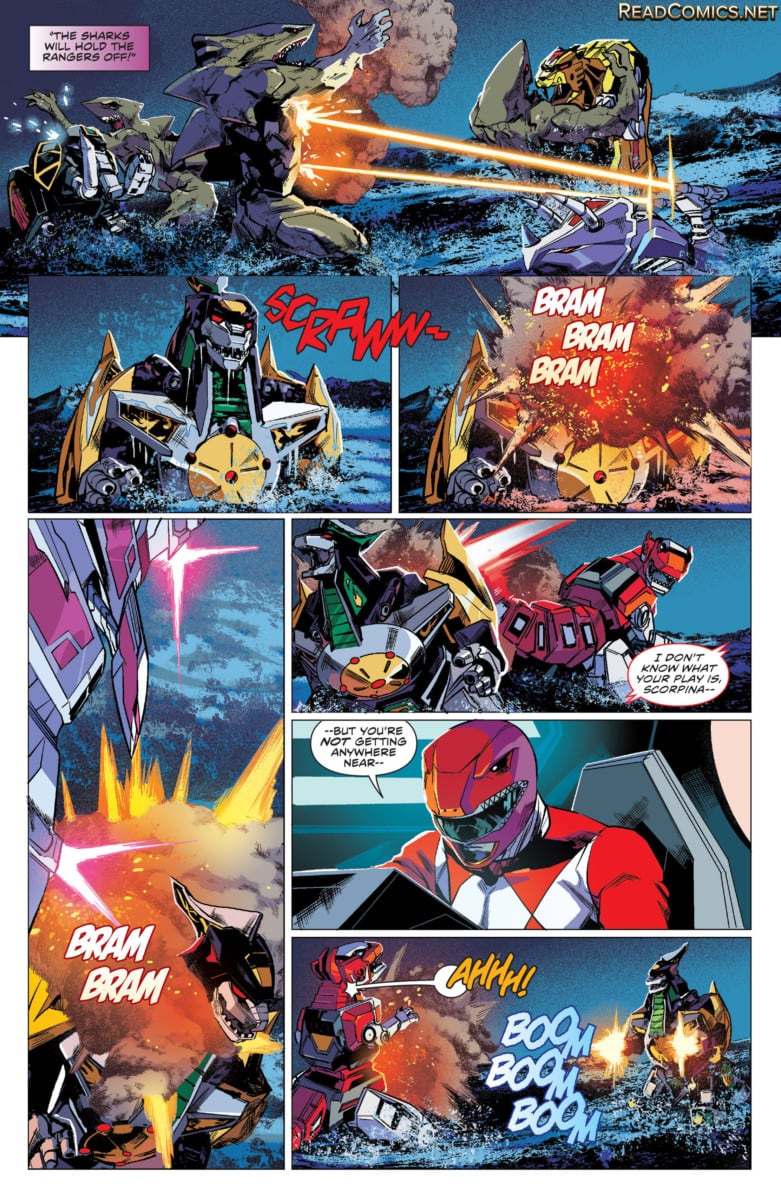 3: The Scope of the Action

Unlike the TV or Film versions of the Power Rangers, the comic book stories aren’t restrained by a special effects budget. The action in these comics is incredible. The Zords are intricate and have much better attacks. The destruction is more devastating, and it can happen anywhere. The freedom of the comic also allows the Rangers to battle in different countries, dimensions, and that adds to the lore. We no longer think of the Rangers as just teenage heroes of Angel Grove, but well trained and capable defenders of the universe. 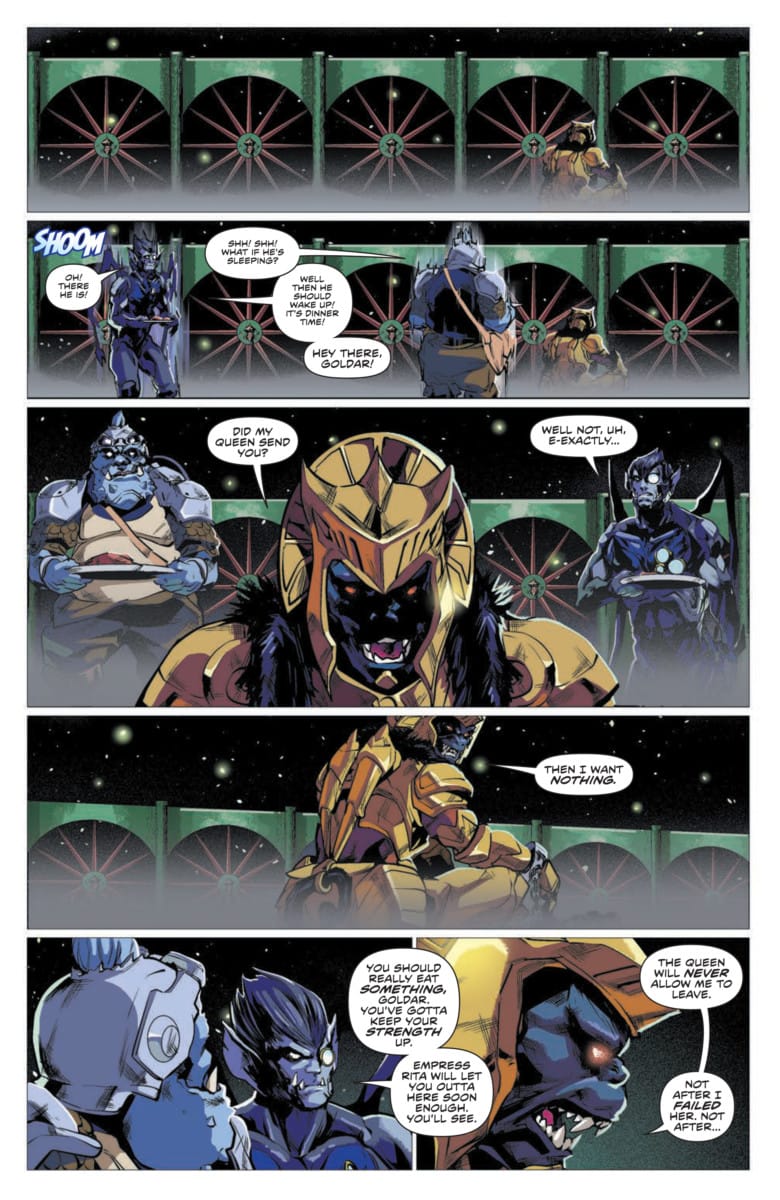 One of the main things I remember about Power Rangers is the villains were dumb non-threatening losers. Rita was a funny witch-lady, Zedd was the skinless brain-guy, Goldar was a glorified henchman, there was a pig-man with a Trojan helmet, and the Putty Patrollers could be destroyed with a nice love-tap to the chest. In addition to fleshing out our heroes, BOOM! has given us better villains, specifically Goldar! In a story called “One the Strong,” which is in the MIGHTY MORPHIN POWER RANGERS ANNUAL, we’re given a Goldar origin story. He had a brother named Silverback who was a mighty, but hot-tempered, warrior. Zedd killed Silverback for his insubordinate attitude and Goldar understood because they were both raised to be obedient soldiers. We don’t see Goldar as a thug who gets beat up, but a committed warrior who is actually tactical and smart. This new Goldar isn’t limited to the short comic written by Trey Moore and illustrated by Terry Moore. In the Pink Ranger spin-off comic, Goldar leaves Rita and Zedd to take over the world himself and doesn’t fair so bad. As a result of BOOM!’s commitment to their villains, Goldar steals the show anytime he’s featured. 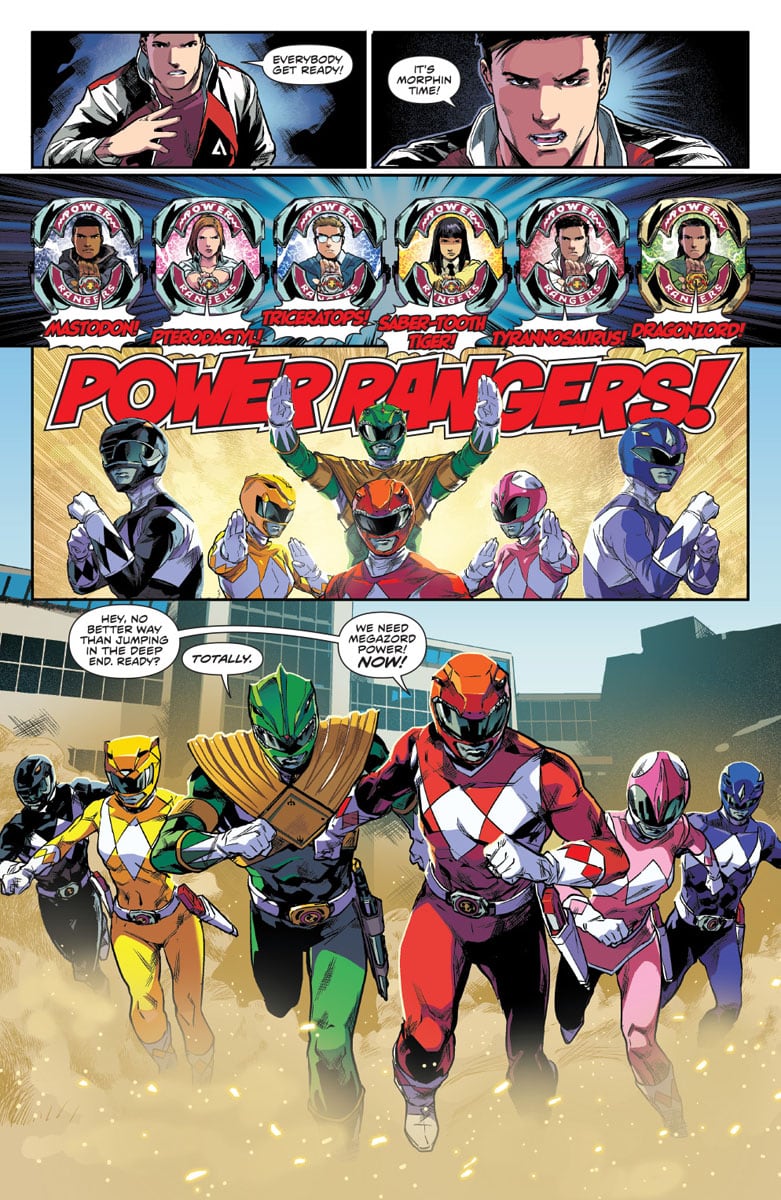 The Justice League, The Avengers, the X-Men — whatever team it is, there is something magical about when they all get together in one panel. The Power Rangers are no different and maybe it’s better than when those other teams get together because this comic feels triumphant return for them. What the Kyle Higgins and Co. have done so well is establish the Rangers as a team. It isn’t that no one stands out; it’s that they all stand out for unique reasons and they’re equally valuable. Overall, Batman is probably much more appreciated than Hawkman. Storm is probably more liked than Beast, but it’s clear the Rangers are best when they’re together. It’s a difficult dynamic to pull off, but I think it’s the best it’s been done in recent memory, if not all time.

You can buy MIGHTY MORPHIN POWER RANGERS online or in a store near you!